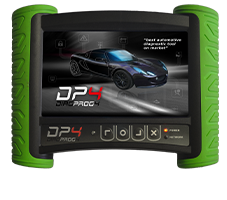 Huge technological leap enabled Elprosys company further development of DiagProg3 diagnostic tester. As a result of this work company have developed and recently released DiagProg 4 Diagnostic tool for cars- the most advanced and powerful automotive diagnostic tool currently available on the market.Faster programming, LOG file auto save or easier access to erase diagnostic faults are only few of many benefits that DiagProg4 Diagnostic tool  users can utilize. 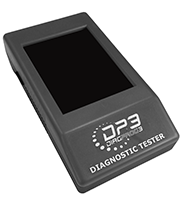 In 2000 ElproSys began production of DiagProg Diagnostic tool for cars, which has been used for car modules diagnostics and repairing as well as other electronic car modules. 10 years of continuous improvement of equipment, based on an examination of customer needs and adapting to technological developments, led to the creation of ultra-modern DiagProg3 in its current form - the most popular Diagnostic tool for cars in the world. Below you can find the DP3 predecessors. 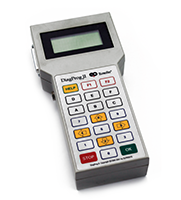 In view of permanent progress on PC market resulting in frequent alteration of software (e.g. operating system) as well as PC operation  parameters  - ElproSys has introduced to the market its own standard of a portable computer, which is power-supplied from the vehicle diagnostic plug. In new device called DiagProg II we got rid of the problems related to non-compatibility and different operation clock rate of PC computers. DP2 had a feature to update software version - current software release was always available to download from our server. The new equipment has been designed purposely to meet needs of those customers who were not advanced PC users - its simple operation allows comfortable work. 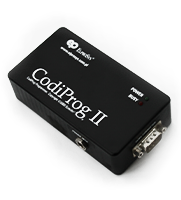 DiagProg predecessor as an independent programmer was CodiProg (DiagProg 1) - an appliance which operated only when connected to a PC, used for programming integrated circuits that control dashboard equipment of various vehicles. CodiSys device  allowed to repair dashboards after programmable breakdown and was only one of few appliances that enabled in-circuit programming of microchips (with no need of de-soldering).

IN CASE OF PROGRAMMING MILEAGE OR HOURS OF OPERATION, THE SOFTWARE MAY BE USED SOLELY FOR REPAIR-RELATED PURPOSES. HOWEVER, IN SOME COUNTRIES ANY CHANGES TO ODOMETER (CLOCK) READING OR TAMPERING WITH THE MILEAGE ACCURACY SHALL BE FORBIDDEN UNDER PENALTY.
PURSUANT TO ART. 306a OF THE POLISH PENAL CODE, WHOEVER ALTERS ODOMETERS OF MOTOR VEHICLES OR TAMPERS WITH THE MILEAGE ACCURACY SHALL BE SUBJECT TO THE PENALTY OF DEPRIVATION OF LIBERTY FROM 3 MONTHS UP TO 5 YEARS. WHOEVER COMMISSIONS A THIRD PARTY TO PERFORM THE ABOVE-MENTIONED ACT SHALL BE SUBJECT TO THE SAME PENALTY. 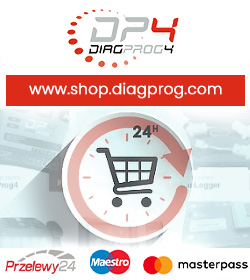 According to Polish law we are obliged to inform you, that we use cookie files in our service. You can change your browser settings in order not to accept cookies.
Details in our privacy policy.